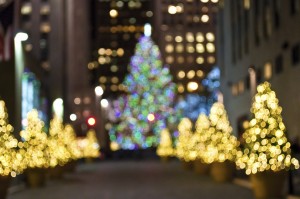 There is one iconic scene when you think of New York City during the holiday season. That is Rockefeller Center. Whether you’re a native New Yorker or a visitor, you will be hard-pressed to not stop by and see what 30 Rock has to offer in Christmas cheer. Crowds or not, this is truly one of the most iconic and festive areas of NYC. Tradewinds Vacations reviews this great destination and what you won’t want to miss this holiday season.

If you’ve only has the opportunity to see the tree at Rockefeller Center on TV, that really doesn’t do it justice. For over 80 years, the lighting of the tree is the official kickoff of the holiday season in the city. The tree is so big that it is brought in by crane. It then takes more than 30,000 lights to decorate. The lighting of the tree is so popular and such a stand out moment, that it is now televised around the world in mid-November. You can see the many lights on this behemoth of a tree from 5:30AM until 11:30PM daily until Christmas Day, and then they are only lit until 9PM until New Year’s Day. Be one of the tens of thousands that brave the winter chill to see the Rockefeller Christmas tree in all its sparkling glory.

Another custom not to be missed at Rockefeller Center is the ice skating rink. What has long become a tradition for many originally was supposed to be a one-time deal to attract attention to the Plaza. Well, that one time deal in 1936 has turned into a major attraction and permanent fixture. Be prepared for a possible wait if you are planning to skate, and not just be an onlooker. This rink can only accommodate 150 skaters at a time, which seems like a lot, but not really in a city of millions, with millions more visitors. You can lace up your skates and practice your moves around the rink Monday – Thursday from 9AM until 10:30PM, Friday and Saturday from 8:30AM until midnight, and Sunday from 8:30AM until 10PM.

The tree and ice skating rink at Rockefeller Center are cultural institutions of yuletide cheer in the Big Apple. Gather your friends or your family, don your cold weather gear, and get ready to embark on a holiday adventure that can only take place in New York City.