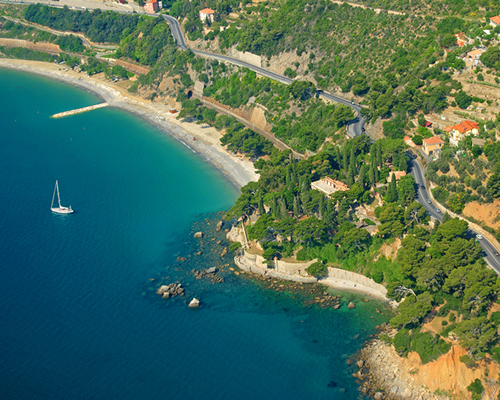 When people go to Italy on vacation, they usually hit the hot spots. Venice is overrun with tourists, as is Rome and Florence.

Tuscany is filled with villas and inns, and most of the Italian Alps swell in the winter. However, if you want an unconventional trip to Italy, consider a run down the west coast of the country. Filled with gorgeous Mediterranean beaches, and old, sun-drenched towns, the Italian Riviera is definitely worth a glance.

First, Genova should begin your tour.

Any why? One word: Pesto! Genova has the best pesto in the world, as they created the glorious basil, pine nut and garlic paste or sauce. Most restaurants will have a pesto pasta dish, kind of like most restaurants near the sea have a fish dish. But, if you want the best, try Frank Sinatra’s favorite spot “Zefferino” or “Trattoria da Maria”. “Maria” is Genovese food on the cheaper side of things, without much compromised in terms of taste.

Go south from here, and spend a day at Portofino.

Again, one of Sinatra’s favorite places in the world, which also has some amazing views and restaurants. It’s overwhelming charm is easily your first impression, as its casual, lazy streets stretch up the hill from the crowded port. To the east, on a high cliff, is Castello Brown, a large villa which housed the local Nazi commander during World War II. When the Nazis fled Italy, he was given instruction to blow up the entire town upon exiting. So smitten was he with the town, he could not bring himself to do it. Instead, Portofino remains as it was. Be certain to see the submerged statue of “Christ of the Abyss” as well as the Church of St. Martin and the Church of St. George. Mostly, let your feet guide you and enjoy one of the most beautiful port towns in the world.

A quick trip further south will land you in Santa Margherita.

Here, you will find a much larger, more exotic and more exciting Riviera seaside city than Portofino. Along the beachfront is an esplanade and towering palm trees which is coated with cafes, restaurants and gelaterie (ice cream shops). Be certain that you visit the Villa Durazzo and its pond and gardens. One of the most breathtaking homes along the Riviera, it is complete with Renaissance era fixtures and furniture. The Durazzo is a favorite wedding spot for Europe’s elite.

Finally, end your trip down the Italian Riviera in Pisa.

Be sure to catch the cathedrals, the leaning tower (of course) and the charming city center. But, if you would rather return to Portofino instead, no Italian in the world will blame you.

Article brought to you courtesy of Tradewinds Vacations.