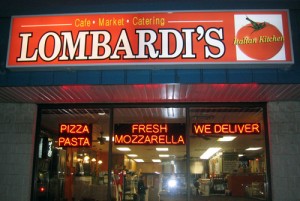 The art of making pizza is thousands of years old. Many believe that the first pizzas were cooked within a brick oven, reaching its current form in ancient Rome.

Since then, many varieties and styles of pizza baking have been created, mostly for our modern convenience. However, if you find yourself in New York, there are 3 singular brick oven experiences which transport you back to the early times when pizza was begun.

The first pizzeria in New York is still active, and located on the very busy corner of Mott and Spring streets.

“Lombardi’s” was formally licensed by the city of New York in 1905. A century has passed and this spot has thrived through the depression, multiple wars, and the ever-changing nature of downtown Manhattan. In recent years, a large expansion to the east on Spring street has captured much more dining space and relieving the excessive wait for a table. The pizza here is the best in New York, with ultra-fresh toppings and a remarkably chewy yet crunchy crust. Feel free to call ahead for reservations if your party is over 8 persons. Also note that Lombardi’s only accepts cash but they do have an ATM onsite.

To the northwest of Noho lies Greenwich Village.

“The Village” is known for its various pizzerias. Notably, the truly-actual-original “Ray’s Pizza” is on the corner of 6th Avenue and 11th street. You will find other knock-off Ray’s throughout the city, so be certain you aren’t fooled and visit the original. However, located just to the east of 7th Avenue on Bleecker Street is John’s Pizza. John’s is another New York brick-oven hotspot. A new version of the restaurant has opened on 44th street also, but don’t mistake it for the original. It’s chewy, thick roasted crust is easily the best in the city. It’s pizzas are also large, so be prepared to take some home with you (or back to the hotel). Be sure to take a moment also to see the photographs of the celebrities who love John’s; they are scattered throughout the venue. You might also see a celeb here, as John’s is located in the heart of New York’s ‘artsy’ West Village.

Finally, if your travels take you to Brooklyn, be sure to plan a stop at the underrated “Peppino’s” on 5th Avenue and 10th street.

Here you will find Brooklyn’s BEST brick-oven offering. Be sure to stick to the pizza here though, as the other dishes don’t measure up to it’s pie. Peppino’s is an understated, noise free restaurant which also offers excellent and friendly service. Be prepared for a quicker night out here, with a delicious pizza pie to enjoy as well.