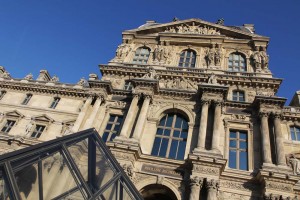 The Louvre is the largest museum in the world, with even departments and collections which date back to the 7th millennium BC. The Louvre was built around the 13th century as a fortress, and then rebuilt in the 16th century as a royal palace, and then became a public museum in 1793.  The paintings, sculptures and artifacts on display have been assembled by French governments over the past five centuries and include works of art and artisanship from all over Europe as well as important collections of Assyrian, Egyptian, Greek, Roman and Islamic art.

The Louvre’s entrance is covered by a glass pyramid designed by American architect IM Pei.  The Louvre is closed on Tuesdays.  It is open 9am-6pm Thursday – Sunday, last admission at 5:15pm, and is open 9am-9:45pm Mondays and Wednesdays with the last admission at 9:15.  Purchased tickets are valid all day, so you can enter and leave the building as much as you’d like. The Louvre also offers tours.  You can take a 90-minute tour with a museum guide that covers the most popular works and gives you an orientation of the museum’s layout.  If you want to set your own pace you can also take a four-hour audio tour.

The Louvre’s most famous work is Leonardo da Vinci’s Mona Lisa.  Since it takes several visits to get anything more than a glimpse of this museums offerings, your best bet after seeking out a few things you really want to see, is to choose a period or section of the museum and save the rest for your next visit to Paris. It would take you a month of visits to see the more than 30,000 pieces on exhibit. If you want to stay throughout your visit there are plenty of places to eat at the Louvre.  Beneath the Pyramid at the main entrance is the Le Grand Louvre, Café du Louvre, Café Napoléon and the Cafeteria.  There are several other places located throughout the museum.  Pick up a free map at the Information Desk under the Pyramid.  This will give you the locations of all the restaurants as wells as the layout and exhibits of the museum.

From the Louvre to the Grand Canyon or wherever you want to go, go with Tradewinds Vacations and explore more.